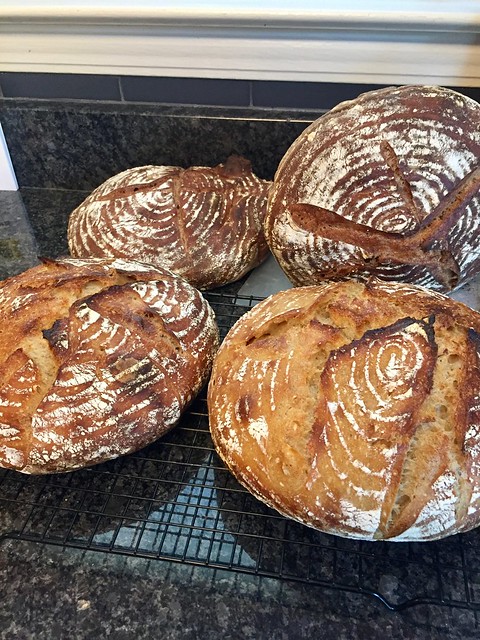 I baked bread again last weekend. That’s not all that unusual; I don’t think I’ve bought bread since March or April. It kind of came up on Instagram and Facebook because my long time friend and colleague (and fellow baker/cook-type) Bill Hart-Davidson commented that I should post some pictures. So I did. More than necessary. And now here I am writing about baking bread, also more than necessary.

I’ve tried to make bread for years. The first loaves I tried to make long ago (and I do mean rectangular bread baked in a loaf pan) were dense and inedible, I think now because I thought you had to knead the hell out of the dough and also because I was trying to follow terrible recipes. I’ve tried to make some of the breads featured in Thomas Keller’s Bouchon and Bouchon Bakery cookbooks, and while I like both of these books for different recipes, the breads are overly complicated.

A few years ago, my first successful bread making resulted from following Mark Bittman’s (relatively) famous No-Knead Bread recipe. And by the way, if anyone is reading this thinking “hey, I’d like to make a good crusty loaf of bread at home, where do I start?” I’d say right there. From this recipe, I learned there are two keys for making good bread at home: time (this recipe takes 24 hours), and a cast-iron Dutch oven. This is a pretty basic piece of cooking equipment– the go-to pot for making stew, chili, soups, etc., etc.– and if you don’t have one, you should buy one anyway. A pre-heated and covered Dutch oven gets a lot closer to the environment in the ovens the professionals use to make really good bread. Essentially, you pre-heat the Dutch oven to 475 degrees, carefully take it out and take off the lid, dump in the dough, put the lid back on, and bake for about 30 minutes. Take the lid off and bake some more for another 20 or so minutes. Handling a rocket-hot cast-iron pan is also where a pair of grill gloves comes in very handy.

About a year ago, I was in a bookstore in Traverse City and I picked up a copy of The Elements of Pizza by Ken Forkish. I occasionally buy books (particularly cook books) because of the cover, and this one is an example of that impulse. It’s a very pretty book with lovely pictures, and it also turns out to be a really well-written book, one that I’ve been following for making pizza dough since I bought it. But pizza is a slightly different topic.

Then I found Forkish’s first book, the James Beard award-winning Flour Water Salt Yeast: The Fundamentals of Artisan Bread and Pizza. This, my friends, this book is the absolute best. Forkish explains the process of making high quality bread at home in extraordinary and easy to follow detail with great recipes and photos. What I like most (and experienced myself) is Forkish starts with recipes and techniques that are simple (there’s a good recipe at the beginning of the book where you can make some good bread in a day) and moves on to more advanced techniques, though still all with the same four ingredients highlighted in the book’s title. He also has some very useful videos where he demonstrates his recipes.

Like Bittman, Forkish’s technique hinges on baking in a Dutch oven, but I also learned from his book about the usefulness of large plastic tubs to mix and hold the dough (I bought mine at a local GFS, which is great for inexpensive kitchen stuff) and  wicker proofing baskets. The tubs are handy for anything where you need a big container (I’ve brined chickens in these before), and they are very useful for mixing Forkish’s recipes since they end up involving a kilogram of flour. The proofing baskets are a unitasker and not really necessary– a big bowl with a tea towel dusted with flour does the same thing– but they are handy and they are what gives the finished bread those cool-looking rings of flour.

Oh, another tool you kind of need to follow Forkish’s recipes is a kitchen scale, but in my mind, that’s kind of like a Dutch oven: if you don’t already have one, you should buy one anyway since these scales come in handy for all kinds of cooking.

Since June or July, I’ve been making natural leavin breads (aka sourdough) from the same starter, and that includes the current batch. Making the initial leavin took five days; to revive the leavin from storage in the refrigerator takes two days, so for baking this past Monday, I started waking the leavin this past Saturday.

This is perhaps too much work and time to spend on something as trivial as bread– even good bread– especially since there are plenty of places near me where I can get bread as good. Zingerman’s comes to mind. This past weekend, I ended up making a total of two kilos worth of bread, far more than Annette and I can consume– though fortunately, I have found that homemade sourdough bread lasts quite a bit longer than store-bought bread, and well wrapped, it will keep in the freezer for a couple of months.  Plus I sometimes give it away.

Still, I find it satisfying to make bread. Unlike academic work, it’s very systematic, it’s finite, and it produces a lovely result that is even edible.