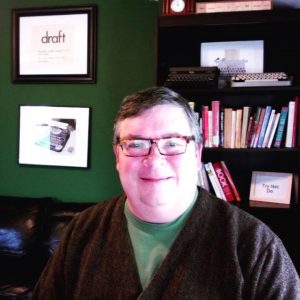 I was born in Wisconsin, I lived in several different places as a child, and I have lived in Ypsilanti, Michigan now for longer than I have lived anywhere else, but I still consider Cedar Falls, Iowa to be my home town. After graduating high school in 1984, I attended the University of Iowa where I earned a BA in English. After my undergraduate degree, I entered the creative writing program at Virginia Commonwealth University in Richmond, Virginia, and I earned a Master of Fine Arts degree. That’s when I first started teaching as a graduate assistant, fall 1988, just a few months after I myself was a college graduate.

I continued to live in Richmond until 1993, working part-time as an adjunct instructor at VCU and full-time in the marketing department of the Virginia Student Assistance Authority, a student loan agency. While my title there was “public relations representative,” most of my work involved desktop publishing, document design, and technical writing. Richmond is also the city where I met my wife, Annette Wannamaker.

In 1993, I entered the PhD program in Rhetoric and Writing at Bowling Green State University in Bowling Green, Ohio. My dissertation, which I have made available on the web, was called “The Immediacy of Rhetoric: Definitions, Illustrations, and Implications.” In 1996, I began work as an Assistant Professor in the English Department at Southern Oregon University in Ashland, Oregon. That’s where our son William (Will for short) was born. In 1998, I joined the faculty at Eastern Michigan as an Assistant Professor, and in 2002, I was granted tenure and promoted to Associate Professor. In Fall 2007, I was promoted to Professor.

Most of my teaching focuses on the relationships between writing and technology. Technology can’t replace good teaching nor can it solve the problems of bad teaching, but I do think it both facilitates and questions the student-centered classroom in interesting ways that have made me a better teacher. I’ve been teaching online courses as a part of my regular teaching load since 2005. I don’t think I’d say I prefer it to teaching face to face courses, but I do like the format, and I do believe online courses are as effective as face to face courses. There is no point in comparing which one is “better;” rather, it’s all about the affordances of the different formats.

I am the author of More Than A Moment: Contextualizing the Past, Present, and Future of MOOCs, published by Utah State University Press in 2019.  I co-edited (along with Charles Lowe) a collection of essays about MOOCs called Invasion of the MOOCs: the Promises and Perils of Massive Open Online Courses, which was published by Parlor Press in 2014.  I’ve also published a variety of academic articles and chapters in collections, along with commentaries, columns, and reviews.

Annette and I live in Ypsilanti within walking distance of EMU and about 8 miles from downtown Ann Arbor. Besides the usual academic things (reading, writing, traveling, etc.), I am an avid home cook.