Complaining about Comcast is sort of like complaining about death or taxes and about as common.  I know that. But because of a Twitter exchange I had, I thought I’d add to the genre generally and specifically to my latest Twitter follower, @ComcastLisa. This is more for her than anything else, so if you have had your fill of internet posts complaining about Comcast, feel free to move along. If you’re a glutton for punishment, read on.

My Comcast woes all started back in early September, as I recounted in this blog post, when I tried to hook up a new cable modem. It’s worth noting here (again) that I was hooking up a new modem because our service had been spotty for months. While no one at Comcast ever told me this, it turns out that the reason for this was my modem was out of date. Anyway, even though I was pretty furious and spent about two hours on the phone getting my modem to work, I was happy because someone at Comcast tried to make me feel better by giving me all kinds of stuff I didn’t really want, including permium channels a phone line (we had Vonage and I didn’t see a reason to switch). The guy I talked to promised me my bill would go down by $10 and I didn’t have to use the Comcast phone line if I didn’t want to. So I thought we were done.

Then I received a new cable modem from Comcast in the mail, a modem I didn’t want or need– at least I didn’t think that was the case.  But I found out on about September 14 or so two “fun facts” about the upgrade I had been given. First, it was actually going to cost me more money than my original plan, and second, I needed to hook up the Comcast modem I didn’t ask for to get this to work, which sort of negated the purpose of me going out to buy a new cable modem. So okay, another couple hours on the phone, which included getting the Comcast wifi turned off since I already have a wireless network in my house. So the plan became we’ll ditch Vonage and over this year, phase out the home line entirely.

On September 19 or so, my son noticed that the DVR function for our box in the living room had been shut off. I noticed it this day because we were planning on recording a movie on HBO and also because we ended up watching a movie on HBO that evening. So I called back Comcast, and after about three hours on the phone where they were going through the process of getting this to work, and our services kept getting turned off and on and off and on. We did ultimately get it to work, though I lost the line with at least one customer service rep and another rep I talked to kept saying stuff like she had to try a few “tricks” to fool the system into getting it to work. Whatever.  I watched The Dallas Buyers Club, great movie, and I thought everything was fine.

The next morning, September 20, all the premium services we had been promised and that had been working the previous day had been shut off again. So I called Comcast and spoke with easily the most clueless customer service rep to date. He said that I wasn’t going to get any of these new features until September 25, which was the estimated delivery date of my new modem. When I explained to him that I already had the new modem and it was in fact hooked up, he didn’t know what to say. I kept asking for a supervisor and he kept refusing. Ultimately, I hung up on him because he obviously didn’t know what he was doing and I called back.

As an aside, this is one of the things I’ve learned about customer service at Comcast generally: if you don’t think the person you’re talking to knows what they’re doing or is giving you the wrong information, just hang up and try again. Every time I call it’s as if the person I’m talking to is running their own company and making this shit up as they go along. So if you’re not happy with what someone is telling you or doing, just hang up and try again. It won’t be any worse and it might be better.

Anyway, the dust was almost settled on this and then two final things happened. First, once my phone number from Vonage had  been ported over to Comcast, I tried to automatically activate my new phone service. Ha. HAHAHAHAHAHA! Like that would work. No, I was on the phone again for about an hour or so with at least two different people (the first one hung up on me accidentally).

The second thing that happened is I met my new Twitter buddy Elisa S. She responded to a tweet I had made while on hold on September 19; here’s our “exchange.”

To be fair to @ComcastLisa, she did tweet back today after I wondered why she hadn’t responded to me and she asked I send her the number of my account. And I will do that. But I also thought I’d share a narrative too long for Twitter.

So, what do I want? I want to be compensated by Comcast for my time on the phone and for the hassle I’ve been put through. Someone at one point said they could give me $20, which means that Comcast thinks my time is worth about $2 an hour. No, I think Comcast really owes me about $600 for the time I spent, but I realize that’s unrealistic. So give me a month’s free service to comp me for me for my time.

Frankly, I don’t expect that to happen, so I’m going to do everything I can to not be a Comcast customer come this time next year. Of course, South Park already explained why my dream of being Comcast-free is unlikely: 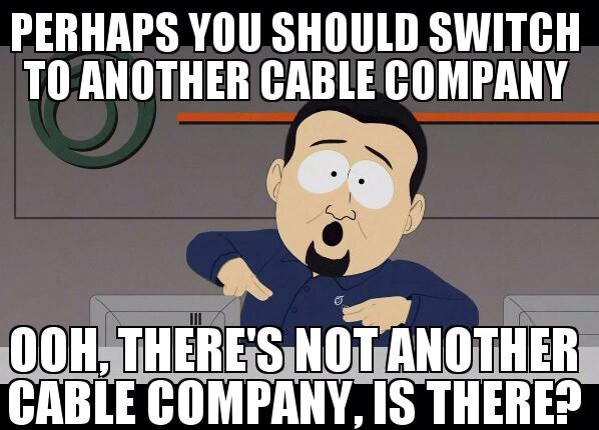 Anyway, if you actually read this @ComcastLisa and you want to do what I’m asking and compensate me for my time, send me an email at stevendkrause@gmail.com