Loyal stevendkrause readers and/or just friends of mine might recall I went on a cruise back in 2014 where my reaction at the end of it was basically “that was mostly okay, I guess.” So why am I on a Transatlantic cruise now?

Here’s what happened: Annette’s parents regularly take a cruise back from Europe home to Florida in the fall (they go to Germany for a while every year in the late summer) in part because it is cheaper than buying an airplane ticket (though see below on that).  This is because the cruise ship companies do what are known as “respositioning cruises” where they move their ships from one part of the world to another– in this case, from the Caribbean to Europe. How much cheaper are these cruises? Well, back in late October 2016, Annette looked it up and the most inexpensive room on the ship we’re on (double-occupancy in a small, interior [e.g., windowless] room) was about $500 a person for a 15 day cruise. The stateroom we got– which has a big window, a king-sized bed, and room to move around– was more than that, but still not that expensive. 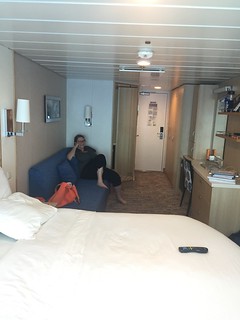 So Annette asked me then what I thought. “I say we go ahead and book it,” I said, which I think surprised both of us. “Here’s why. If we like this, then it’s something we can do once in a while for the next 20 or 3o years. If we don’t like this, then we’ll have 20 or 30 years to tell the story of that awful trip.”

It’s too early to say which way this story will turn out– maybe a bit of both– but for “part 1,” just the at sea part, I’d say take the plane.

There’s not a lot to say about being at sea. It was kind of boring. We ate, drank, gambled, read, watched stuff on my laptop, took in some cheesy shows, repeat.

Very quickly, we figured out that the average age of passengers on this cruise is at least 65. That makes sense– who has time to take a cruise across the Atlantic in May?– but it is a bit jarring. At this point in my life, I am used to being one of the older people in the room, especially in a classroom. While there are a fair number of people about our age and younger, it often feels a bit like visiting an assisted living facility. Many of my fellow cruisers shuffle by slowly or have canes or walkers or wheelchairs or little scooters.

Speaking of which: I’m not really a fan of the genre, but this could be a great setting for a zombie story. It would start out seemingly normal, but very soon, once people started falling ill, it would be clear that many of the passengers were turning into the undead. A number of ways to twist the plot: first, is that shuffling old man a zombie or just an old man? How to tell? Second, since there are no firearms on board and not a lot of other handy weapons, how would you stop the zombies? Clobber them with a deck chair? Push them overboard? 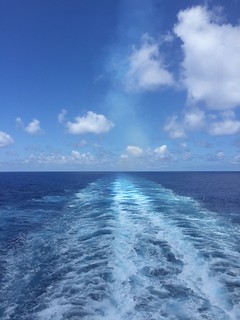 Most of the other passengers– both American and not (a lot of British on this ship, which is not surprising since that’s where we end up)– seem like the kind of people who voted for Trump or Brexit. So other than small-talk, we tend to keep to ourselves. Chatting with the waiters and bartenders is more interesting. Most of them are in their 20s or so and from all over the place– Eastern Europe, the Caribbean, a lot from India and Indonesia. They’re all charming and polite and either have excellent English or are trying to get a better command of English by chatting it up with the guests. I don’t think these folks make a lot of money by American standards (or Western European standards, for that matter), but, as this article argues, it’s kind of relative– plus they get free room and board, which means this is the kind of job where you can bank much of what you earn. 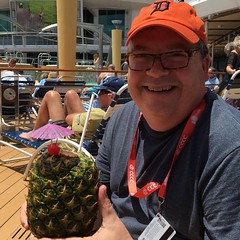 Speaking of what the service crew earns: everything has a large “service fee” or an 18% tip associated with it. So, an $8 glass of wine and a $10 cocktail (and crazy drinks like one put in a pineapple are more than that) really ends up costing a bit over $21. On the one hand, it’s the main source of income for the waiters and what-not, so there’s no reason to be cheap about it. On the other hand, these fees and taxes and tips mean that ridiculously low price for the cheap rooms is a bit of a myth, especially since a week at sea tends to make drinking seem like a good idea. 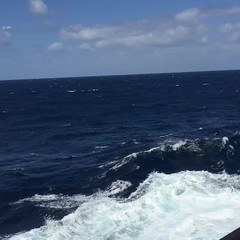 And then there is the “at sea” part of things. First it was smooth; then it was six foot waves; then nine; then, about halfway across fifteen to twenty foot swells. Everyone was wobbling around and grabbing on to whatever, and there were barf bags posted on the stairwells. The wind on deck made it difficult to walk. I didn’t feel sick or nauseous, though I take some of the seasickness pills they were passing out. Mostly, the rough seas irritated me.

One big thing that definitely turned out to be a good idea was the wifi package. It was $12 or $13 extra a day for each of us, but worth every penny. We’ve been able to keep in touch with Will, follow the news and social media and the like, and we were able to stream stuff on Hulu and Netflix– so we’re all caught up on The Handmaids Tale.

But “part 2,” ports of call, will get a bit more interesting I suspect. We’ve already been to one, the Azores, which was quite beautiful. More on that later.