My silence here has been the result of being too busy about some things and not able to say much (yet) about other things. I’ve been too busy with teaching since the end of June– two classes, one of which was a mere six weeks long (and that was a mistake), and another that wrapped up on Monday. It is too much work too fast, but the money is hard to pass up. Without getting into the details of my salary, faculty teaching in the summer are paid 10% of their base salary per summer class they teach. That adds up so the work is welcome, though for a whole bunch of reasons, this might be the last summer I do this kind of teaching for a while.

And there are many things I would like to write about that I can’t write about here, at least not yet. Some have to do with ongoing scholarly projects, though the thing that is most on my mind that I want to write about but I don’t feel like I can has to do with some very strange faculty contract hijinks. But the dust has to settle on that first.

How’s that for vague?

Instead, I’ll mention three things that are broadly speaking in the department of what I’ve been doing lately/what I’m looking forward to doing soon.

Summer teaching went well, fall is coming soon. Like I said, summer (teaching) is over and prepping for this fall term is coming along, though oddly. I am preparing a face to face version of a class I most recently taught online (and I haven’t taught this class face to face in several years), and also an online version of a different class I most recently taught face to face. It is making me feel sort of backwards in an odd way.

This coming school year is the first year in some time where I won’t be teaching a graduate course, though the course Writing for the World Wide Web has both undergraduates and graduate students in it and I am continuing this year as the Associate Director of the First Year Writing Program and that typically involves a lot of connection with Graduate Assistants. I kind of miss the teaching, though I like the undergraduate teaching experience just as well and those classes have the advantage of not being at night.

Oh, and I moved offices, graduating (based on seniority– I’ll be starting my 18th year at EMU this fall) to a larger office with a window. More on that later I am sure.

I’ve been really into pizza lately because of this book, The Elements of Pizza. I bought it while we were up in Traverse City in May. Besides being a beautiful book, I very much appreciate the advice from Ken Forkish, techniques and recipes that walk the thin line of overly obsessive to playfully forgiving (it’s just pizza, after all). Forkish has talked me out of my childish visions of a backyard pizza oven and talked me into just getting it to work in my oven (though I am not sure my oven really gets hot enough, but that’s a slightly different conversation). I need to get his bread making book, Flour Water Salt Yeast.

The garden has been so-so. In some ways, it has been an example of neglect that has turned out kind of nice anyway: 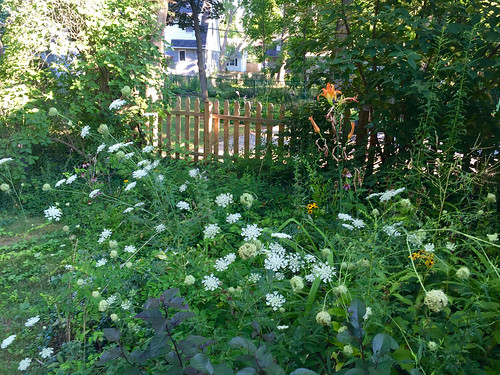 All those white flowers that are kind of pretty are actually just weeds, and those weeds are kind of covering up other weeds. This close-up of some of the front-yard garden is a little nicer and more planned: 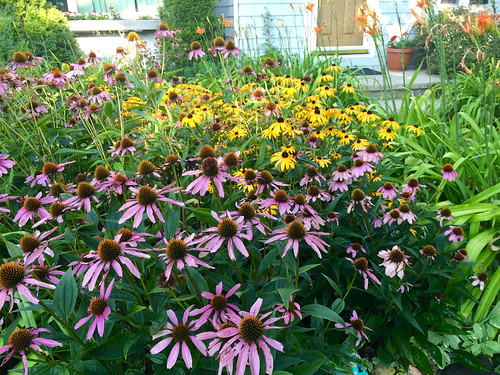 I’ve had two main experiments plant-wise this year. One is corn, which I planted as kind of a joke: 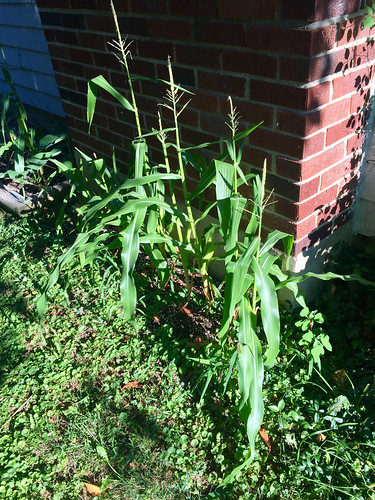 The other is these basically black tomatoes which I believe are called “Indigo Rose:” 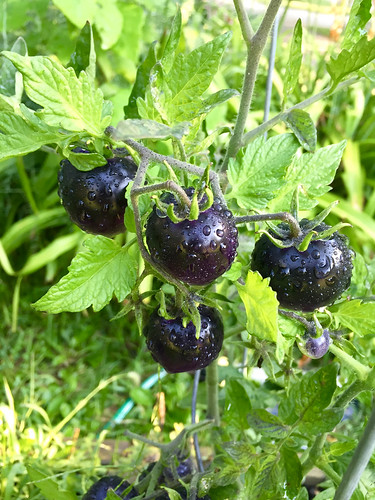 Besides being really pretty, they have taken a bizarrely long time to ripen (and it’s kind of hard to tell when they’re ripe, too). And they taste like tomatoes.