The case of the child wandering into the enclosure for Harambe the gorilla at the Cincinnati Zoo brought back the memory of the time when Annette and I lost Will at the mall.

He was somewhere around two and a half or three years old. For some reason (I cannot remember why now), we thought it was a good idea to get a proper little kid portrait of him done at JC Penney. I believe we were there in the morning on a slow day in the summer, and I recall we were early for our appointment. So we had to keep Will entertained for the fifteen/twenty minutes, and we did this by chasing him around the mostly empty store. Will ducked into/underneath a circular rack of shirts or something on hangers, Annette and I ran around opposite sides of the clothing rack, and he popped out the other side, laughing hysterically. Simple, goofy fun. We repeated this routine at least three or four times.

Then he vanished. I mean completely, like that Vegas-styled magic trick where they drop the curtain and there’s nothing there. Nothing.

As I recall it now, I felt a mix of panic and disbelief– panic for the obvious reasons, disbelief because he literally vanished. Annette and I frantically searched the nearby clothing racks yelling WILL! WILL! WILL!, and generally freaked out. We got a hold of some kind of manager and told her what was going on, and as I think about it now, her reaction was reasonable to the point where this had almost certainly happened before. There was some kind of announcement about a lost child and we continued to look for him.

Then we found him– I think it was actually Annette who found him– outside the mall entrance of JC Penney’s. He was standing and carefully examining a kiosk that was selling mini aquariums that contained very small and colorful frogs. As I believe Annette recalls it, she said something to him like “OH MY GOD, WILL, YOU RAN OFF! DON’T EVER DO THAT AGAIN!” and Will’s reaction was something like “What’s the big deal? I wanted to look at the frogs.”

And after we all collected ourselves, we had Will’s portrait photo made: 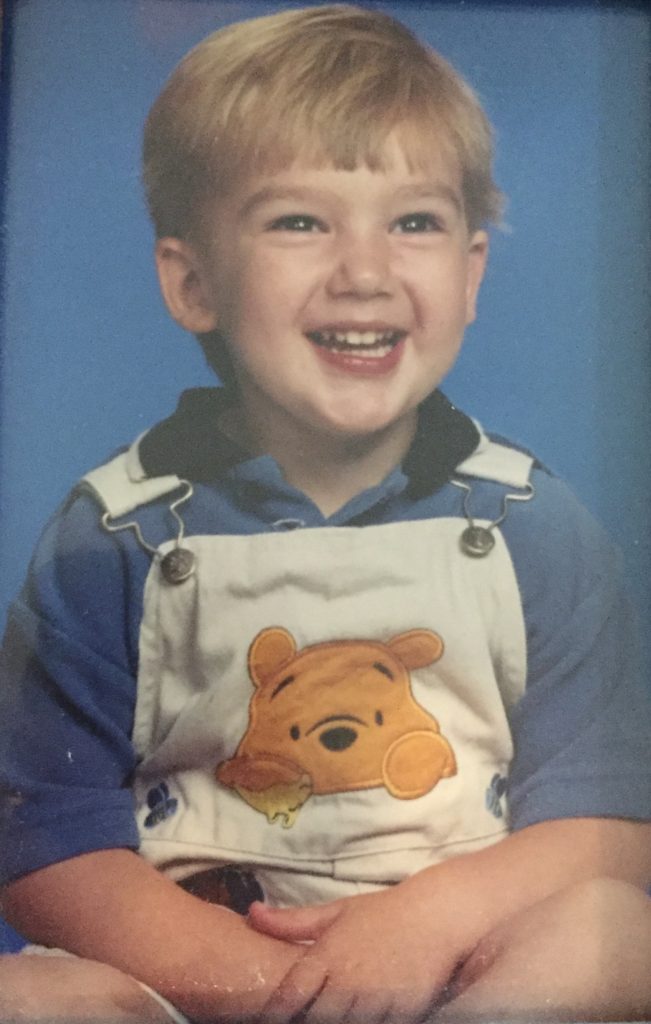 (At least that’s my memory of this– maybe Annette and Will will have slightly different takes on this).

In any event, filtering this back to the current story about killing a gorilla/”bad” parenting/bad kids: