I really like Ann Arbor, so you won’t usually find me bitching about its pretentious, richy-rich, trendy, and snobby ways. Leave that kind of cynicism to these guys. Sure, I like Ypsilanti just fine, but I also like the idea of living near (and, someday, perhaps in) a city with safe and clean streets, art, good restaurants, arty film options, great book stores, good coffee shops, nice parks, etc., etc.

But this fairy door thing is really freakin’ stupid. 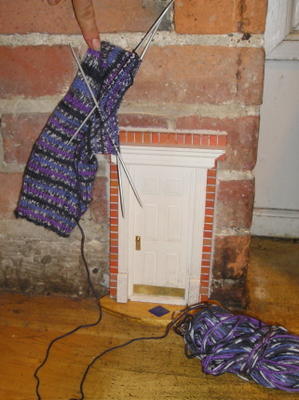 As has been discussed in this AAIO post and elsewhere, so-called “Fairy Doors” have started to appear at stores in the main street area. Above is a picture of one at Sweetwater’s, a coffee shop that I would go to more often if they had wifi access in there.

(Slight Update):
This is where I found this picture in the first place; if it doesn’t show up in your browser, check there.

Okay, I guess this is just something kind of stupid and cute. Whatever.

But then today, in today’s “The Talk About Town” column in The Ann Arbor News comes this conjecture/threat:

“It’s wonderful,” says Bucella-Costa. “This could turn into something like the (painted) cows in Chicago. “It’s even better than the cows because it appeals to people’s imagination, too.”

Good Lord, that’s all we need: busloads of sisters-in-laws tromping up and down Main Street, studying their maps to the fairy doors, stooping over to see the oh so cute little non-doors, laying on the concrete to get their pictures taken next to them (“Move to the left, Helen– your head is blocking it all out”). Maybe there will be little mini fairy doors (??) for sale right next to the mini versions of those cows in Chicago (or, God forbid, those weird Herky the Hawkeyes that were in Iowa City a couple years ago) at one of those “fine art” stores in the mall. Gosh, I can’t wait.

THERE ARE NO FAIRIES, PEOPLE!

6 thoughts on “I got your fairy door right here, pal…”