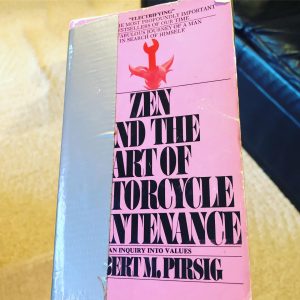 I just finished reading Robert Prisig’s Zen and the Art of Motorcycle Maintenance (and I don’t think anyone deserves this since I’m talking about a book originally published in the early 1970s, but spoilers ahead). I have been reading it off and on for about four years, though I’ve been trying to read it in some ways for around 32 years. It has me thinking now about reading generally, and also about my career as a writing and rhetoric teacher.

I read for pleasure quite differently than I read professionally. For one thing, because my work involves almost nothing else but reading, I don’t read that much for fun anymore– much in the same way I assume most professional cooks don’t cook that much for fun anymore. That’s been the case for me ever since I started my doctoral studies. While in the midst of that program, everything I read was for school– I bet I read less than five books for fun in the three years I was doing coursework and dissertating. Nowadays (and this has been the case with me for decades), I’m much more likely to spend my leisure time watching television or movies. I try to read a bit before I go to bed, but it’s usually for only 15 or 20 minutes and it isn’t close to every night. Spending less time pleasure reading means a quick-paced mystery or pop-paperback I used to rip through in a week as an undergraduate or MFA student now might take me two months. A much more dense book (like this one) might take two or three or many more years.

Though I should note a few things in my defense as a book nerd and reading enthusiast. First, I’m talking about actual words on the page here, usually on paper but sometimes on a device. I listen to books often (along with podcasts) when I’m at the gym, walking to and from work, out and about running errands, and so forth. Second, I tend to read multiple books like this at the same time. I think I have about four novels and two nonfiction books on my night stand and/or in my kindle right now. Third, I read for fun more when traveling, over holiday breaks, while on “lay on the beach” vacations, that sort of thing. I used to read a lot on planes, but less so now since flying nowadays usually includes on-demand movies and television.

I first heard about Prisig’s Zen and the Art of Motorcycle Maintenance as an undergraduate. A good friend told me his high school debate coach gave his graduating seniors a copy of the book as a keepsake– more on that in a moment. I bought it around 1986 or ’87 (my copy has clearly required a little repair over the years) and I attempted to read it a couple of times. It went poorly. I think I got about 100 pages into it in the early 1990s. I thought it was boring. One of the things I decided about pleasure reading a long long time ago is I have no problem with not finishing a book if I don’t have to– and I have to say I have given up on finishing a lot more books than I’ve actually finished. Life is too short. 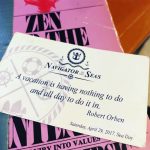 For some reason, I picked it up again about four years ago and decided to make an effort to get through it this time. Off and on, I read it along with a few other for fun books, some of which are still on my nightstand. I took Zen with me on the transatlantic cruise we took in 2017 (I’ve used this card housekeeping left in our room as a bookmark for the last couple years), to China this May, and to many other points in-between. It was a good “I can’t get to sleep so I think I’ll read a bit” book because after about five pages, I’m usually out.

Which is to say I still think the book is kind of boring– or at least difficult reading of the sort I don’t tend to do for fun. It has its moments of course, but it is less a spiritual/zen-like father-son cross country motorcycle trip and more a quasi-philosophic meandering on the book’s subtitle, “An Inquiry Into Values” (specifically “Quality”), and also about the narrator (a cross between Pirsig himself, a fictional version of Pirsig, and/or of the alter-ego Phaedrus) who is in a bad marriage, has a bad relationship with his son, and who is trying to recover from a breakdown that landed him in a psych ward.

It’s also a book I suspect a lot of people encounter at the wrong time in their lives and for the wrong reasons. Going back to when I first heard of this book: what kind of message is a teacher/debate coach sending to his students by giving them this? It seems to say a lot about the teacher to me. And judging from the reactions I saw when I posted about finishing my reading on Facebook, a lot of people first either read (or were assigned and didn’t actually read) Zen for a high school or college class of some sort. To me, that’s the classic teacherly mistake of assigning a reading because you really really love it but your students don’t and have absolutely no way of relating to it at all. A lot of people also said they read it in a rhetoric class, which kind of makes a bit more sense, though using this book as way into say Aristotle or Plato or the dialog Phaedrus seems kind of like assigning a book like The Seven Habits of Highly Effective People in an advanced psychology class about motivation.

I think I finally finished it this time because (besides the book’s qualities as a sedative) there was enough for me to now relate to– not the specifics of the narrator’s personal problems, but more his work as a college teacher. A little less than halfway through, there’s this passage: 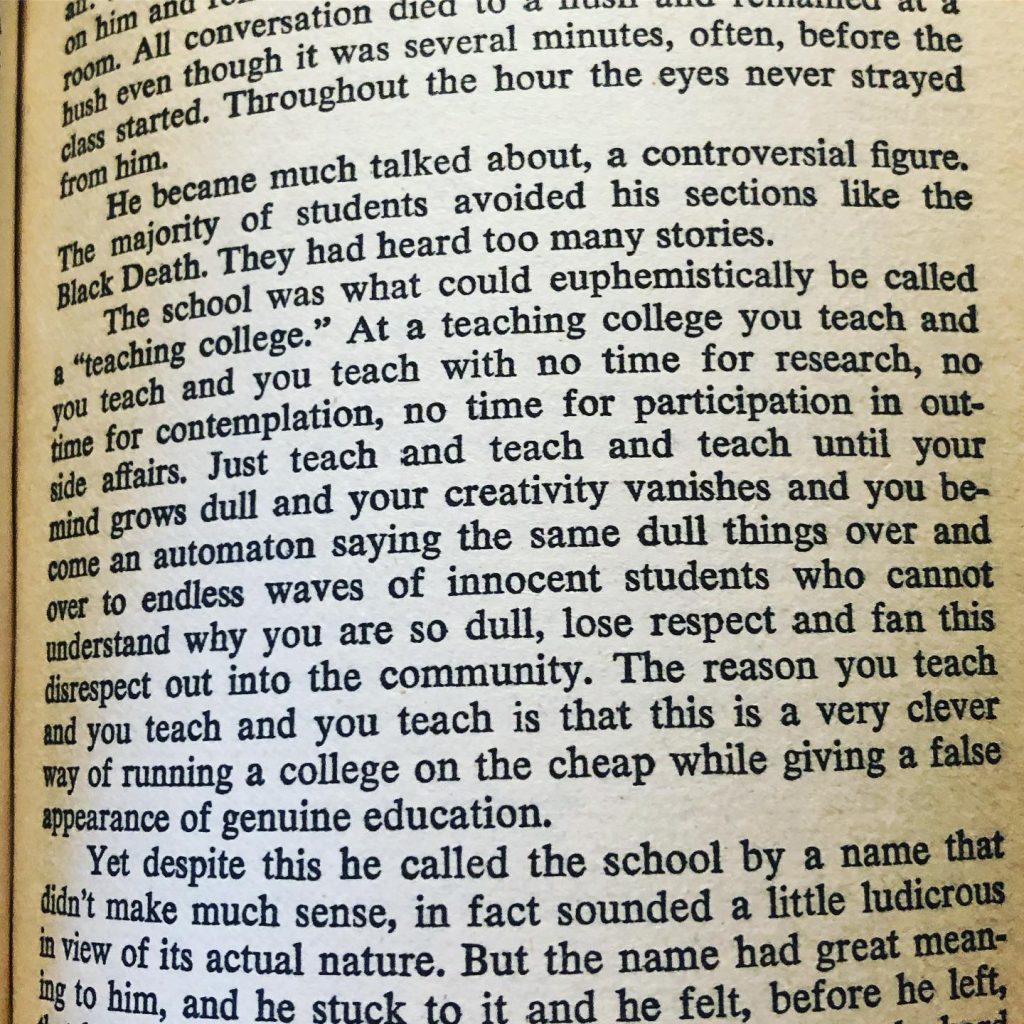 This is the cynical/”when I’m not having a great day” interpretation of where I work and the nature of my job at “teaching college.” So I can relate, sort of.

What emerges as the book continues is the narrator is some level of faculty member (I don’t think this is made clear, but I’d guess he’s an adjunct) teaching some creative writing but a lot of what sounds like first year composition and rhetoric. There are several passages where we learn more about Phaderus’ approaches to teaching rhetoric and writing, most of which strike me as kinda bad teaching. But there are also a number of moments where Pirsig captures the frustration of the work quite well. For example: 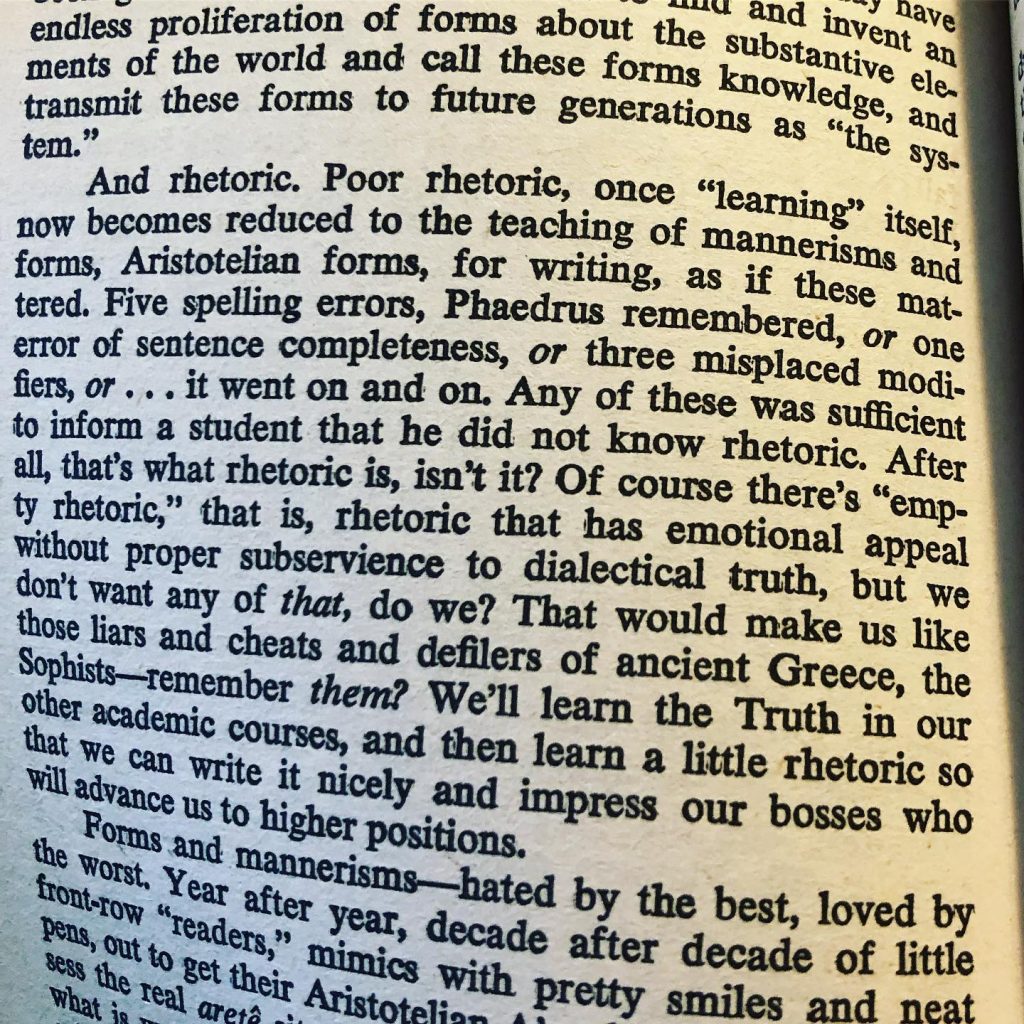 I don’t think there’s anyone in my field who doesn’t recognize this misinterpretation of rhetoric and the purpose of first year writing (and similar courses) assigned to the course by academics in other disciplines. So I get it.

But beyond all that, I’d call the book “okay.” It was worth reading, but I don’t know if I’d recommend it exactly. I’m glad I can check it off some nonexistent list of things to read before I die, I guess. Maybe I’ll put another one of those “important” books almost no one has actually finished on my nightstand and start that next– maybe after I finish what I picked up again last night, the Obama Biden mystery Hope Never Dies.

One thought on “Finally finished “Zen and the Art of Motorcycle Maintenance;” it was okay”