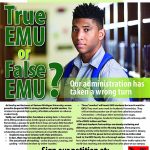 EMU is in the news once again for the wrong reasons, and interestingly enough, the latest problems are helping me find a conclusion to the book I’m working on. But before I get to that, let me try to explain a bit what’s going on here.

One of the things that happened at the end of the Fall 2016 semester (thanks in part to the knuckleheads who were in charge of the EMU-AAUP back then) was the administration entered into a deal with an operation called Academic Partnerships (AP). AP agreed to market nationally an online Bachelor of Science in Nursing program (BSN) along with an online Bachelors of “General Studies” program. In exchange, AP would collect around 50% of the tuition collected from these online students. As I wrote back in February when I went to an informational meeting on all this, I saw a lot of problems with this arrangement with AP, and the new leadership of the EMU-AAUP had LOTS of problems with the deal. The new EMU-AAUP leadership said that the arrangement with AP goes well beyond marketing and that ultimately, AP would be doing a lot of the teaching and curriculum work of these courses under the name of EMU and without faculty control, The administration has argued this isn’t happening and isn’t going to happen, that AP is just marketing.

The administration didn’t want to negotiate this at all, so the EMU-AAUP essentially took them to court: that is, a labor arbitration process where a judge/arbitrator hears the case and makes a ruling. I know that was in process, which might explain the timing of the EMU-AAUP’s PR campaign right now. So far, that campaign has been pretty effective. The Chronicle of Higher Education picked up the story here, “Faculty Members at One More University Push Back at Online Programs.”  Here’s a longish quote from that article:

As an online program manager, or OPM, Academic Partnerships has contracted with Eastern Michigan to market and recruit students for its online programs. Typically, OPMs — which also include 2U and Pearson Education — build a college’s online enrollment and bring in more revenue than the college arguably could bring in on its own. But critics argue that such partnerships can result in a lower-quality education and fewer consumer protections.

According to a recent report on the industry from the Century Foundation, “the involvement of a third-party — particularly a profit-seeking entity — in providing services so intertwined with the actual teaching and learning … presents potential risks to quality and value in the education.”

That “recent report” from the Century Foundation is perhaps something more interesting to me and my work on MOOCs than most quasi-casual observers of this arrangement with EMU, but among other things, OPMs are a lot more common and far-reaching than I thought. It’s pretty damning of the deal EMU has made, but also of the deal that many many universities have made.

Also in the press today is this piece from Michigan Public Radio, “Faculty unions fight EMU online degree contract with ads.” EMU’s spokesperson/PR guy Geoff Larcom is quoted saying that EMU won’t be using any AP “coaches,” and he went on to say this:

Larcom says initiatives like this are necessary, because Michigan’s population of college-bound students is projected to shrink over the next decade.

“Regional universities like Eastern Michigan, like our peers, are needing to think of ways to further enhance revenue,” he says.

Just as a slight tangent here: first, whenever anyone associated with the EMU administration says anything about the institution’s finances and then they don’t say anything about how much money EMU wastes on athletics– particularly football– I stop listening. The bottom line is the upper-administration and the Board of Regents cannot have it both ways. Second, universities like EMU need to recall that we are a state-operated and non-profit university and our main purpose is to educate students. We’re not about generating “revenue” generally, and if Michigan’s population of college-bound students does indeed go down over the next decade or so, then maybe EMU should think more about graceful strategies for getting smaller rather than “growing revenue.”

The story also got picked up by this piece from EdSurge, “Professors Take Out Ads Protesting Their University’s Online Degree Programs.” I came across this piece because Larcom posted a link to it on the EMUTalk Facebook page– he offered it as an example of how this article demonstrates faculty input and control in the process. I don’t think that’s what it says at all, but let me quote from the end of this article because I think this is what Larcom is referring to here:

“They wanted to know, ‘Do you really need letters of recommendation for students?’”[Ronald Flowers, Department Head of Leadership and Counseling in the College of Education] recalled. But he said he always pushes back in such situations. “Our faculty make the decisions about who gets in, and that process hasn’t changed at all.”

“There’s been a perception that Academic Partnerships has dictated some things,” he added. “But I’ve been in the room when we’ve had conversations where I’ve said, ‘This would threaten our academic integrity and we won’t go there,’ and they’ve said, ‘Fine.’”

He said that the charges made in ads placed this week by faculty groups about the university’s arrangement with Academic Partnerships are “not accurate.”

“I appreciate the concern about the nature of privatization of public education—I get it,” he said. “We don’t dispute that it’s a good conversation to have. But it shouldn’t necessarily be a conversation stopper.”

For union leaders, though, the biggest concern seem to be what might happen as these for-profit entities move closer to the academic core.

I suppose you could read Flowers’ recounting this exchange with AP as an example of how faculty (though in this case, I’d say administrators since a Department Head at EMU is technically not a faculty member but an administrator) can “push back” against AP. But the fact that this relationship with AP requires any faculty to “push back” is a huge problem. And all it would take for AP to get their way on lowering the standards is a less forceful administrator– which is why I think the EMU-AAUP’s fears are valid. It’s also the conclusion of that report the CHE article links to, “The Private Side of Public Higher Education.” One quick quote from that report relevant to this quote:

If institutions—public and nonprofit alike—are not careful to monitor these contractors, students and taxpayers who thought they were working with a relatively safe public institution may find that they have been taken advantage of by a for-profit company. More so than other contracting arrangements, OPMs represent the outsourcing of the core educational mission of public institutions of higher education, threatening the consumer-minded focus that results from the public control of schools.

But what about your MOOC book? Oh yeah, that. If you’ve read this far, I guess I can go into that a bit…

My book project has the working title “MOOCs in Context” and it’s about the rapid rise and fall of Massive Online Open Courses viewed from the instructor experience (I interviewed a bunch of people who created and taught MOOCs), the student experience (I took a bunch of MOOCs and write about that), and also from the historic experience (I compare MOOCs to previous technical innovations in distance education.)  I guess I have two basic arguments: first, there has always been a disconnect between what MOOC providers hoped/thought MOOCs could be and what MOOC students and faculty hoped/thought MOOCs were. Second, MOOCs are not “completely new” (a claim made repeatedly by MOOC providers and pundits); rather, they are part of a long history of distance learning technologies that have happened in higher education in the U.S. over the last 150 or so years.

I’ll spare the details for now, but MOOCs “failed” in the sense that they will not be altering the way that higher education works in the foreseeable future. They will not, as some pundits predicted just a few years ago, close down universities. But a lot of what I’m trying to do in the last chapter of this book is to ponder the “fuzzy future” of what comes after MOOCs. It’s obviously tricky, but one of the things I think the “MOOC moment” should teach us about the future of higher education is to be weary of the “transformative” promises of for-profit entities like AP. So from my point of view, this EMU “current event” story will fit in well with the end of my book. We’ll wait for what the arbitration says, but I hope it’s a happy ending.

One thought on “Academic Partnerships, “False EMU” in the news, and finding a concluding “hook” to my book project”