I was in Arkansas this past weekend for a meeting/work session/subject area consulting event that’s part of a program sponsored by the NICERC— it’s a long story, but it’s been an interesting opportunity for me to participate in something that is both actually interdisciplinary (as in like people from radically different fields than mine) and that is very STEM-oriented.

Anyway, after lots of work including a half-day on Sunday and before my flight back home Monday, I went to the Clinton Presidential Library in Little Rock. I took a few pictures; a few random thoughts:

I’ve always liked Bill. Among other things, he was the first Democrat I voted for who actually won. And sure, while there were ways he ended up not being quite as liberal or progressive as originally hoped/promised (sound familiar?), he still remains for me a pretty darn successful president. So yeah, I was a fan before and after the visit.

The library and museum are in an impressive building in a park area just off of downtown and next to the Arkansas River. So that all kind of made it worth it, sort of. They also had a pretty cool replica of Clinton’s Oval Office down to copies of the photos on Clinton’s desk. I would have taken some pictures, but that wasn’t allowed. Though I could have paid someone (I have no idea how much it cost) to take my picture sitting at the desk, which is to say that the Clinton Presidential Library has a schtick for making a few bucks that’s not a whole lot different than getting your picture taken with Santa at the mall.

But for the most part, there really wasn’t a lot of stuff in the museum– or maybe what was there was still fresh enough in my memory to not really be that interesting to me. Or maybe if I was really a Clinton fan and/or a Clinton scholar, I would have found it more fascinating. But mostly, it was just text, lots and lots of text. For example, they had binders under these big glass displays that summed up a year in the Clinton presidency that were filled with summaries of each of Bill’s daily schedules.  In other words, I could have stood there with one of those binders and read about what Clinton did every day in December 2000. Of course, I could also just look that up online, too.

And, not surprisingly, it was a pretty “one-sided” story in terms of the Clinton legacy. I guess I can kind of understand this– I mean, this isn’t the George H.W. Bush “I should have had a second term” Presidential Library, it isn’t the Bob Dole “second place” Presidential Library. Still, I would have appreciated something a little more even-handed. I wasn’t exactly expecting to see the Monica Lewinsky dress on display, but there was pretty much nothing explaining any of the circumstances around Clinton’s impeachment– only that he was impeached and his lawyers successfully defended him against the charges. (And for the record, my take on this has always been that it was a partisan hack-job based on bogus charges that Bill made worse and into an impeachment fiasco because of his weird fooling around with an intern).

It was interesting to me to see Hillary featured, mostly in her role as supportive first lady (of course), but also a bit in her current role as former senator and former secretary of state. It’s not like it was a campaign poster, but the library is a good reminder that Hillary has been doing a lot of good work for a long time. And also as an aside: I’m still kind of on the fence personally between Clinton and Sanders. I like Sanders’ ideals, I like the idea of breaking up a political dynasty and I like Sanders’ take on campaign funding, and I worry about Hillary’s baggage (beholden to Wall Street, her personal email server, the ever-present feeling that she and Bill are a little too close to the plot of House of Cards, etc.). On the other hand, if you look at her record and her ability to actually and pragmatically get things done in a variety of different positions, Clinton is a good candidate. And I have to say that anyone clinging to Sanders’ narrative of being a political outsider is conveniently forgetting the fact that he’s been in D.C. since 1991 and he was the mayor of Burlington, Vermont for a decade before that.

Anyway, the part I thought was most interesting to me is the eclectic collection of “stuff” given to the Clintons while they were in office. I’ve seen this sort of thing at other similar museums too; I guess I’m a sucker for the kitschy. For example: 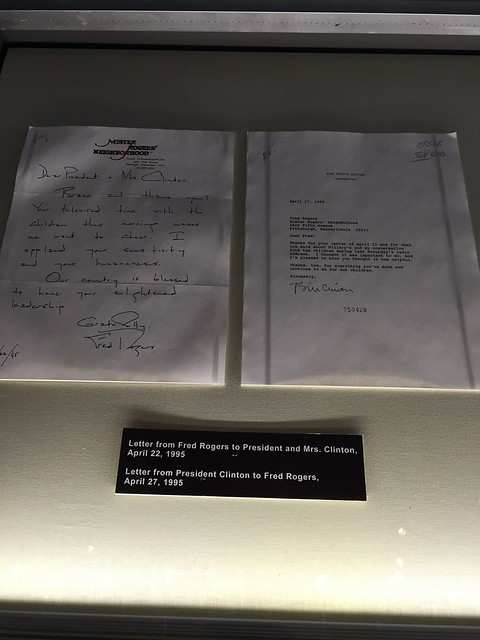 Here’s a letter exchange between Fred “Mr. Rogers” and Bill. 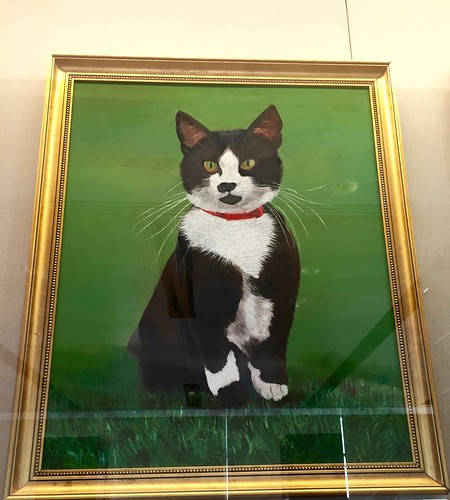 Here’s a portrait someone did and sent to the Clintons of their cat Socks.

And, perhaps my favorite, and embroidered portrait of Hillary Clinton, “Woman of the year 1993.”