Before writing this post, I looked through what I wrote last year about the CCCCs in St. Louis and in a lot of ways, this CCCCs in Las Vegas was remarkably similar to that CCCCs: my semester/year is/has been complicated, I went to some okay panels, stayed at kind of a crappy hotel, etc., etc.  In somewhat chronological order:

The conference hotel/city choice has been a dilema for the CCCCs for as long as I remember. It’s a big conference, but it’s not quite so big as to be able to leverage both a great location and a good rate on conference hotel rooms. So I can understand why people were kind of grumpy about the hotel because it wasn’t nearly as nice as almost anything else on the Las Vegas strip. On the other hand, I can’t remember the last time I’ve been able to afford my own room at the CCCCs conference hotel.

As for Las Vegas: well, so much to say, really. I’ll probably report more on my own adventures with Annette and Will here later– or maybe just on Facebook. But generally speaking, it seems to me few people are neutral on Las Vegas; it’s either “Ooo, Vegas is a lot of fun! Great food and shows and gambling and people watching!”  or “Why on earth would anyone go there?” There’s not a whole lot in-between.  I enjoy Las Vegas quite a bit, but in modestly low doses– for about three days every five or so years. So sure, I understand “the haters” among the college professor/English teacher crowd. But if the CCCCs is going to be somewhere in the west every three or so years, then Las Vegas strikes me as a pretty good choice. Besides, I am pretty sure a lot of the haters just stayed away entirely this year, and judging from my Facebook and Twitter feeds, a lot of these writing teachers let their hair down and put their birkenstocks aside and went out on the town and had a lovely time.

This was my first slide, which drew applause before I could even speak: 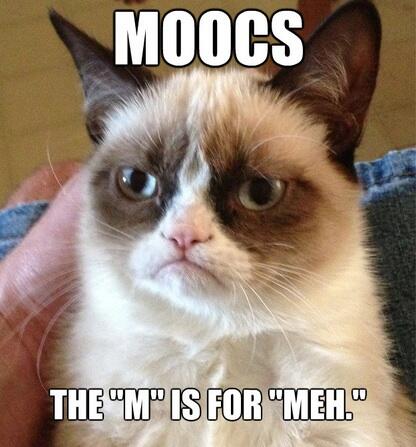 I thought it was a good roundtable because we were all right in our own ways– that is, if Grabill et al attempt a MOOC, it will be better than what I’ve seen so far and/or be an “interesting failure” (I believe that’s how he put it) and I think I am right in that the hype around MOOCs right now simply does not square with the realities of what they currently are. Anyway, a good conversation.

Overall a success, but I am once again reminded of the shifting value of big academic conferences in my career– that is, it’s not the CCCCs, it’s me. When I was a grad student and new faculty member, the CCCCs was important because there was a lot more to learn and because giving a presentation in and of itself constituted scholarship. But at this stage, I need another presentation on my CV like a hole in the head, and while I still learn things and enjoy engaging in the conversations, it’s just not the same as it was.

At this stage, I get a lot more out of smaller events like Computers and Writing or even smaller (and free!) events like the WIDE-EMU.

5 thoughts on “ATTW & CCCCs in Vegas”