Jeff Rice posted just the other day about the well-publicized UC-Davis pepper-spraying incident November 18, part of their Occupy protest on that campus.  More accurately, Jeff wrote about this photo. I’m linking here to the YouTube video, in part because I think it shows a little more nuance in terms of the event.  But the photo and its remixes are also important, as I’ll get to in a moment.

Jeff wrote (among other things, of course):

With the spraying photo, we immediately “know”  that someone should be fired because of this immediacy of emotional response. Barthes might call this response the arrogance of affirmation. Regardless, and as many note regarding the sense of immediacy or involvement digital dissemination allows for, we believe we know. We believe we know many things, but as the Occupy movement continues to demand attention, we believe we know this moment. We know based on a single image of a man pepper spraying kneeling protesters.

These are rhetorical questions and not value based questions. And they deserve some meta attention as well: The blog response, too, participates in such immediacy. I immediately blog in response to the photograph. My emotional response is different than what is publicly expressed regarding the photography, but it is still immediate (a focus of Internet critique – we don’t think through our ideas). Overall, then, I’m intrigued by immediacy in ways others are as well – via the blog or the photo. Immediacy is central to digital expression and understanding. We may not entirely understand that point yet.

Now, I assume he isn’t referring to my dissertation about this, but that word “immediacy” was/is an important one for me.  In my diss (this is a archive version– I think there is some kind of server problem as I write this), I write about immediate situations as being ones where digital media transform analog rhetorical situations.  In my dissertation, the examples were from the earlier, mid-90s version of the internets– email and basic web sites, for example.  As I wrote about it and as I still think about it now (I’ve been slowly going back to revising my diss since I have finally comes to terms to the whole process), immediacy has complicated connotations.  Rhetorical situations/events that are immediate are simultaneously very close to us and also very sudden, so they are thus intimate and chaotic.

The entire Occupy Wall Street situation (which I wrote about here earlier) is the larger and/or source situation for this most recent event, and that could lead to an entirely different discussion that I’m not going to go into now about what exactly constitutes a “rhetorical situation?”  Is it possible that a few years from now that we will think of the UC Davis protest as being unique relative to the Occupy Wall Street protests, sort of like the way the shootings at Kent State in 1970 have come to be seen as its own event and not inherently a part of the larger protests against war in Viet Nam and southeast Asia.

Regardless, I think this qualifies as a particularly immediate event in that it is transmitted to most of us (other than those who were there, of course) electronically and virally via YouTube.  On the one hand, there is a context that is missing here, including warnings before the spraying about the need to move or else.  But the casualness and brutality of the spraying here is hard to miss, and despite the bizarre interpretation of the event that took place on Fox (it’s just a vegetable), there doesn’t seem to be a lot of middle ground here.  This was just bad. 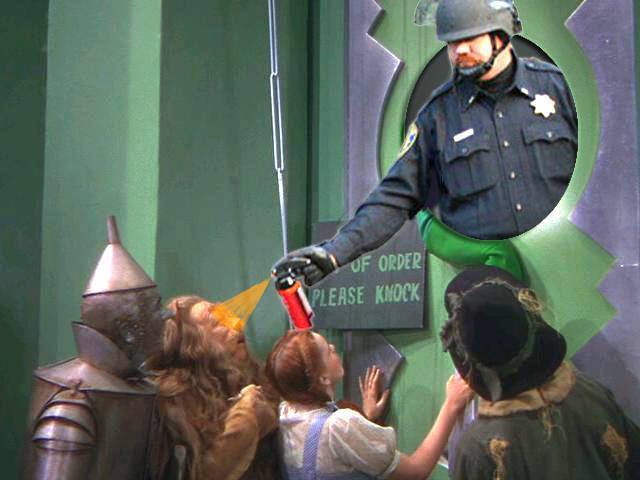 Which maybe why the meme parodies began so quickly, notably at the tumblr site Pepper Spraying Cop.  Jenny Edbauer (Rice’s) “Unframing Models of Public Distribution: From Rhetorical Situation to Rhetorical Ecologies” probably speaks to this sort of meme/viral media event, and one of these days, I want to go back and read that essay again.  Maybe one of these days soon.  But I think that one of the reasons why the parody/humor here works is because the event itself– again, because of the proximity we have to it via digital media– is so obviously one-sided and indefensible that it lends itself to parody.  And the way the image itself functions in relation to readily available Photoshop-like technology also is at play here:  contemporary digital media and technology makes it possible for those who would previously be restricted to an audience role to themselves become rhetors/speakers in this particular situation.

It’s hard to say to what effect.  I suppose it is possible that the hundreds (thousands?) meme parodies of Lt. Pike’s casual pepper spray could create a distance from the actual horrible event itself.  We don’t want to forget that all this fun has a pretty nasty origin point.  Then again, maybe it is preciously the meme that keeps this (and the entire point of the Occupy movement) on the publics’ minds.